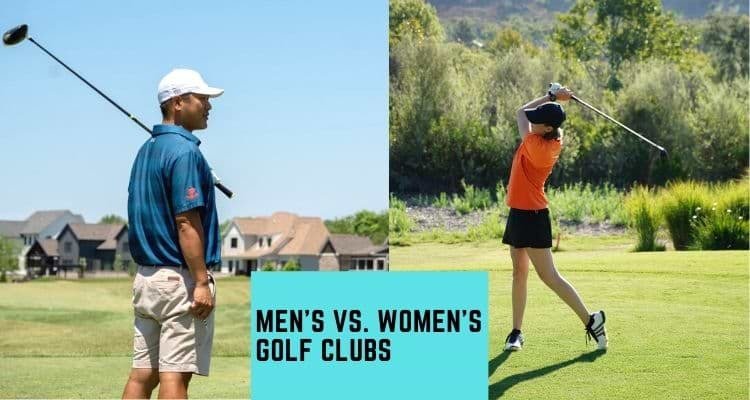 As men and women are totally different in every sphere regarding their physiques and body shape, they need a slight change with their golfing instruments too.

In this article, we will be discussing all the differences between a men's golf club and a women's golf club, and also the reasons for what they are different from each other.

What you will learn in this article

Differences between a men's and a women's golf club

Before explaining the reason why men's and women's golf clubs are different from one another, lets first explore the differences between these two categories.

Now, you may ask what about the short men and tall women?

Can a short man use a women's club, or can tall women use a men's club?

Well, probably not. There are a lot of things you will need to consider in the time of choosing your golf club.

There is a standard golf club length chart that you may look at for choosing the right length club as a man or woman.

Men's hands tend to be rough and large, whereas a woman's hand will be smaller and smooth.

A golf club grip allows you to strike better that is why every manufacturer needs to build a convenient grip for both men and women.

While striking the golf ball, a man can produce more muscular energy than a woman, as a result, the shaft material and sizes also change in the club of both men and women.

For producing more energy in the club of women, most of the shafts of women's clubs are made with graphite.

Although graphite is present in the club of men's club there is a chance of steel layer as well in men's club.

Another variable that changes in men's and women’s golf clubs is the loft angle.

The loft angle determines whether the ball will flight for a long time or for a short time.

Whether you are using a driver or an iron club, it is expected that a woman driver or iron will be more lofted than a man.

5. Weight of the club

What do you think? Is men's club carries a weight greater than women? Or is it a women's golf club that has more weight? What if both types of clubs carry the same weight?

When you carry a golf bag, you can remain sure that the heavier one is of a man’s.

The last thing we are going to talk about here is the flexibility of the club.

Both men's and women's clubs tend to be flexible, but a woman's club is expected to be more flexible than a man's.

Why they are different

Every organ of a man's body is different from a woman's. Although the main objective of the game is the same, the dimension of the utilitarian tools needs to change a little.

By nature, a man will produce more energy than a woman while striking the golf ball for their physical and chemical variables.

Besides, the size of men and women is also different than one another. Men tend to be larger and stronger than women.

As a result, a woman club needs to form a structure that can produce more energy or can make easy leverage of their stroke.

Another reason in the case of women is that women prefer a colorful utilitarian tool because women are sensitive to color by born. That is why women's clubs tend to be more colorful than men's.

On the other hand, men require a moderate way to utilize their strength of hitting and they pay a little attention to the color of the club.

By considering all these things, manufacturer companies produce different dimensions of both men's and women's golf clubs.

And, most importantly, there is no doubt about the fact that all these implementations in men's and women's golf clubs are proved to be useful and both men and women are getting benefitted by these changes.

The main objective of a golf club is to produce you the leverage to take the ball to a greater distance or to putt the golf ball into the hole.

Whether it is a driver, a putter, or an iron, there will have some differences for sure in men’s and women's clubs.

Obviously, there are some valid reasons to support this claim.

The different physical attire of men and women has forced the manufacturer to implement different characteristics in these two types of clubs, and there is no doubt that both men and women are being privileged through these changes.