Although people consider putt-putt and mini-golf as the same, in reality, they are not. There are some fundamental distinctions between these two though both types' target is putting the ball into the hole.

Building a mini-golf course in your backyard or purchasing indoor mini-golf equipment might enable you to play both putt-putt and miniature golf. Still, you will always be making mistakes regarding the definitions without knowing the differences between these two.

What is miniature golf

As the name defines, it is the miniature version of the original golf course, where you need to mimic the exact things you would do in a golf course.

There will have everything in a miniature golf course that you would notice in a regular golf course, including holes, hazards, flags, obstacles, and so on.

Putt-putt is also an off-shoot of the original golf game and even miniature golf as well. In the putt-putt game, the par for each hole is fixed, which is two.

It would be better to say that putt-putt golf is another shorter version of miniature golf that would be a better option for spending time with friends and family.

Now that we are finished learning the definition of both putt-putt and mini-golf, let's find out the differences and similarities between these two-

How did putt-putt appear in miniature golf?

Which one is more appropriate for competition?

Is miniature golf make you skillful for real golf?

Whether it is putt-putt golf or miniature golf, the question that one would ask is whether any version of miniature golf makes you skillful or not.

Whether you love playing putt-putt or miniature golf, there should not have any confusion regarding the matter that you love golf. Though these two types of games provide the same sort of enthusiasm, they are not the real game. We hope to see you on the course with a real driver or iron! 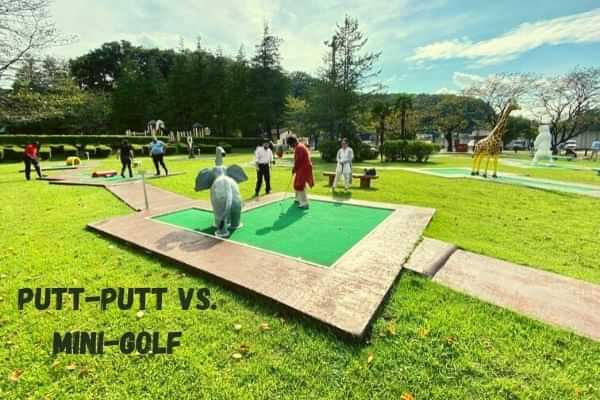