Although the question "is a golf cart a low speed vehicle" seems straightforward, the solution might not be so easy. According to the USA law, vehicles that resemble golf carts in virtually every way are classified as "Low Speed Vehicles". They are also popularly known as NEV. A Low-Speed Vehicle (LSV) is a four-wheeled vehicle with a top speed of 20 to 25 miles per hour on a paved level surface, as specified by statute. Low-Speed Vehicles get excellent gas mileage. On the contrary, Golf carts are vehicles intended for use on a golf course and have a maximum speed of 20 miles per hour or less, according to the regulation. They are comparatively lightweight and cheaper than LSV.

Is a Golf Cart a Low-Speed Vehicle (LSV)?

While golf carts and low-speed vehicles share certain features, there are major differences between the two. These distinctions aren't just physical; they're also legal. Your golf cart, on the other hand, can be converted into a low-speed machine. Do you have a golf cart that you'd like to take out on the road? Not so easy, my friend. Before you can start driving with the big boys, you must first fulfil those criteria.

The federal government has set some rules for LSV. But, some different states have their laws. Meter maids, campus protection, grounds keeping, hunting, and yard work are common uses for LSVs. Because of the low weight cap, lightweight materials have been used to construct LSVs, enabling them to accommodate up to six people plus luggage while remaining under 3,000 pounds.

They're growing in popularity among environmentally conscious motorists who want to reduce their carbon footprint. Transportation-related carbon dioxide emissions were reduced by 23% in families with both an LSV and a standard vehicle. Because most LSVs are electronic, many can travel up to 30 miles on a single charge. Many drivers can fulfil their need with LSV. The LSV, however, will have to maintain a steady speed of 20 miles per hour.

The NEV is a common form of LSV. These are rechargeable battery-powered scooters that seniors mostly use to get around their neighbourhoods. Let's take a look at one specific example. The Villages is an age-restricted master-planned neighbourhood in Florida. NEVs and LSVs currently outnumber regular-sized cars in this region. In reality, they have 87 miles of road dedicated to slow-moving vehicles. This demonstrates that LSV can be used for both industrial and commuter purposes.

According to the rule, a golf cart is a vehicle designed to be driven on a golf course and must not exceed a speed of 20 miles per hour. Golf carts that are still in the factory are often not street legal. They aren't equipped with the safety features that make low-speed vehicles legal. If you were to drive a golf cart on a public road, you'd have to convert it to meet the legal standards. Low-speed cars, for example, are equipped with seat belts, turn signals, headlights, windshield wipers, and other safety features. In addition, any vehicle driven on the road at a low speed must be registered. You should have a driving license and vehicle insurance too.

- Safety: LSVs are subject to additional safety regulations that golf carts do not.

- Age Restriction: LSVs and golf carts don't often require the driver to be of legal driving age or even have a valid driver's license. For more facts, consult your local laws.

- Legality: On certain public roads, most states make street legal LSVs. Golf carts that are street legal are also permitted, but factory-built golf carts are not. Local jurisdictions can have their own set of laws. Golf carts normally don't have- horn, windshield, light, mirror etc., like an LSV.

Laws to abide by

Many states have laws requiring street legal golf carts to avoid thorough major fares and allow regular-sized cars to pass them if they are travelling too slowly. In reality, most states prohibit low-speed vehicles from driving on roads with speed limits greater than 35 mph. In addition, anyone driving a street legal golf cart must follow all traffic laws. This requires them to use their turn signals, stop at stop signs, and yield to pedestrians. You should mount taillights, blinkers, mirrors, a windshield and windshield wipers, headlights, seat belts, a whistle, and rumble strips etc., on your golf cart to make it legal. You'll also need a registration, a driver's license, and insurance, as previously mentioned. You'll almost certainly require a license plate as well. It's also worth noting that golf cart laws differ from state to state and municipality to municipality.

These rules are constantly evolving. If you want to learn more, make sure to do detailed research for your area and contact your local DMV.

Are Golf Carts and LSVs Safe to Drive on Public Roads?

Yes, indeed! This useful article outlines the rules for operating LSVs on public roads in each state. Since these regulations change often, you can contact your local Department of Transportation or DMV office for the most up-to-date and appropriate details. Although most states allow some operation of LSVs on public roads, you can't legally drive your LSV or golf cart on the road unless your state allows it.

What do you understand by a street legal golf cart? 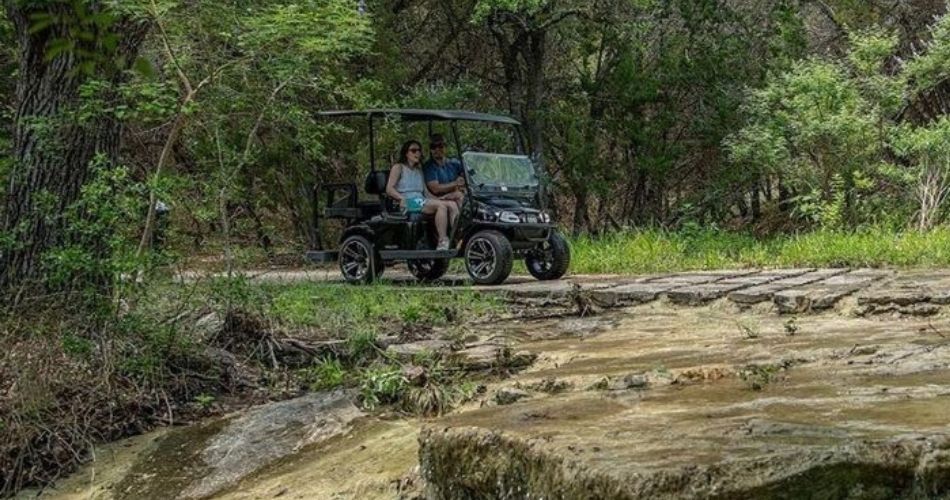 Is a Golf Cart a Low-Speed Vehicle

How to make a golf cart street legal?

Within retirement communities, golf carts are extremely popular. Many communities in the United States, in reality, depend heavily on electric vehicles for transportation. Walking can be challenging for the elderly, and driving a normal car can be exhausting and even dangerous. Driving a street legal golf cart is a great way to get groceries, get around the neighbourhood, and even navigate the golf course. You'll need to turn your golf cart into a low-speed vehicle to get it from the golf course to the highway. As compared to regular-sized vehicles, golf carts are much more difficult to drive on the road because they are slower at manoeuvring turns and making shortstops.

What is the price of a golf cart?

Electric golf carts with a top and windshield usually cost between $5,000 and $7,000. This will get you a simple electric cart and some handy extras like a cooler and club covers. Buyers estimated paying between $2,500 and $5,000 for used vehicles.

We hope you don't have any confusion about "is a golf cart a low speed vehicle" after reading this article. You can easily see the distinctions between golf carts and low-speed vehicles after examining the details above. These vehicles have several advantages in terms of fast and comfortable transportation. However, there are certain inherent safety risks associated with riding them. It can be a lot of fun and a nice way to get around town to drive a low-speed vehicle on a public lane. Remember to be extra cautious and follow all traffic rules. If you don't think you'll be able to do it, it's probably best to stick to the golf course for the time being.