Who does not know the name of Tiger Woods? The answer is everyone does. He is regarded as a living legend in the game of golf.

He has achieved most of the achievements that a golfer can dream about.

From the very childhood to adulthood, he has shown some outstanding performance and is still showing skills and performance that an amateur golfer will dare to achieve.

This is going to be a brief summary of Tiger Woods that may give you some hints about him.

If not as a genius but surely with some natural golfing skill, Tiger Woods bestowed the whole world.

The early coach of Tiger Woods was his father. His father was a military man and as a result, Tiger Woods has received enough opportunity to play in professional military courses from the very early period of his life. At 2 years of age, Tiger played on a regulation course of 9 holes with a 36 par and Tiger finishes the course with 48 par stroke.

At the age of 11, Tiger Woods defeated his father for the first time and since then, his father never managed to win against him.

His father has made a real impact on the building of his career.

He was his coach and role model.

The death of his father was like a total shock to him.

He said, “I’ll never forget the lesson that (dad) told me. That year at the Masters, I tried to win it for him. I knew it was the last tournament he was ever going to watch me play. I need to win one for dad, so he can actually see this before he passes and I tried and I put too much pressure on myself and I went back to California after that to be with Pops and he (was like), ‘What the hell is wrong with you?’ And I said, ‘Well dad, I tried to win it for you.’ He said, ‘Haven’t I taught you anything in the game of golf? You do it for the inner joy that it brings, you don’t do it for anyone else.’ And (I was like), ‘Yeah, I took myself out of what you taught me.’ Looking back on this year, at the core of it all is that I wanted to do it again. I wanted to do it for myself that I could climb the mountain one more time.”

Many people criticize that Tiger has lost his track after his father’s death.

Maybe it’s true for his personal life but Tiger surely has made such progress in the game of golf. 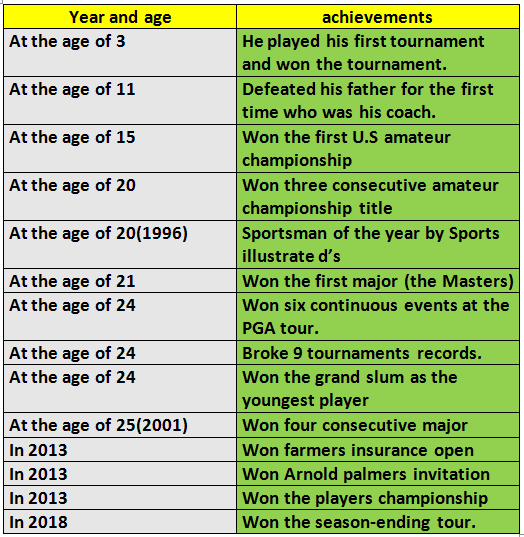 For sure there were some setbacks in Tiger Woods life. But all the achievements throughout his whole career can create envy and jealousy for anyone.

At the age of 15, Tiger Woods won the first U.S Junior amateur championship as the youngest player.

At the age of 20, Tiger Woods became the first player to win three consecutive amateur championships in 1996.

In 1996, at the age of 20, Tiger Woods had been awarded the Sports Illustrate d's sportsman of the year.

The year 1997 is very important to Tiger Woods because, on April 13, 1997, Tiger Woods won his first major, the Masters, and was awarded as the tournament's youngest winner (at the age of 21)

In 2000, Tiger Woods managed to win six continuous events on the PGA tour after Hogan in 1948.

In 2000, Tiger Woods broke the nine tournament record which is known as the greatest performance in golf history.

At the age of 24, Tiger Woods won the grand slum as the youngest player to achieve this milestone.

With the win of the Masters in 2001, Tiger Woods became the only player to win four consecutive major professional golf titles.

Instead of these huge achievements, Tiger Woods also has a personal life where he lives like an ordinary person.

In his personal and career life he has some setbacks and great achievements which as a family member or as a general individual we observe.

In 1999, Tiger Woods needed to go through laser eye surgery for having difficulty with his eyes.

In 2003, Tiger Woods get married to Elin Nordegren.

In 2007, they had a baby daughter named Sam Alexis Woods and in 2009, they had a son named Charlie Axel Woods.

But for some misunderstanding, they get divorced in 2010.

Since then, Tiger Woods is alleged to have many affairs with many girls.

Let it be secret as we don’t like to talk about someone’s personal life.

Tiger Woods is considered the most prestigious golf player living in the present era.

He has achieved almost every title that is possible for a player to achieve.

But although with a prosperous career, his personal and marital life was not smooth at all.

There were breakdowns in his life every now and then.

But anyone can take him as an idol if he would like to take his career to a greater extent in golf avoiding his personal life.

If not a family member, he is obviously a great golfer or maybe the greatest the world has ever seen.